Homepage | News | News | ‘According to society’s preconceptions about anorexia, I don’t really fit the image – I am a man’

‘According to society’s preconceptions about anorexia, I don’t really fit the image – I am a man’

I have anorexia. According to some of my friends, I am “disciplined”. According to my illness, I am never doing enough – never restricting enough and never exercising enough. According to a recent HSE report, help for me and people like me had to be “temporarily paused” in 2020. According to statistics, I am more likely to die of my mental illness than any other person who is mentally ill.

According to society’s preconceptions about anorexia, I don’t really fit the image – I am a man.

Accepting the fact that you have an eating disorder as a man is a struggle in itself. We all have an image of someone with an eating disorder, an underweight, usually teenage, girl; this isn’t an incorrect image, but it isn’t the ONLY one. I’m someone who can comfortably run 15km, then head to the gym for a couple of hours in the same day. I was the regimented one, my friends would often say to me, “I wish I had your motivation” or “I’m so jealous I can’t eat healthy like you”, spoiler alert: I didn’t, and don’t eat healthily. These comments spurred me on, they helped me to convince myself that my behaviour was laudable rather than damaging. I even weaponised the positive remarks of others to trivialise my Mom’s and other loved one’s worries. In October 2020 I was diagnosed with atypical anorexia – a form of anorexia where patients present with restrictive behaviours and fear of weight gain but don’t meet the low weight criteria seen in anorexia nervosa.

In fact, their weight is often within the ‘healthy’ range for their age. Six months on, I’ve just about started to accept that I do have anorexia. Before this I often said, “the psychiatrist said I have anorexia”, I wasn’t able to say “I have anorexia”. 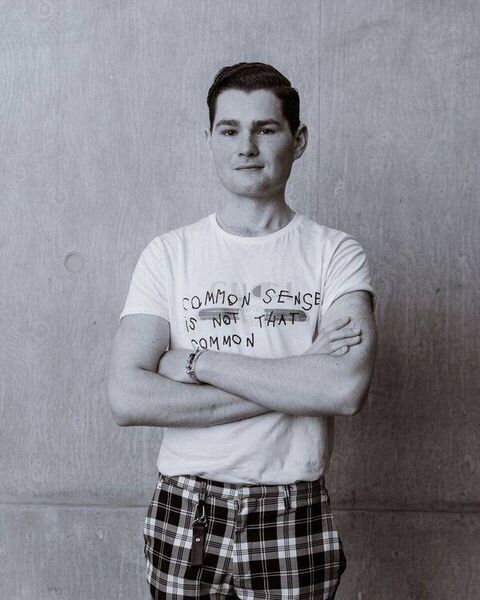 Society has taught us that eating disorders (EDs) are a female issue. Yes, it’s undeniable that EDs affect women all over the world to a large extent, but pigeonholing EDs as a women’s issue is problematic. In Ireland, there has been a sharp increase in hospital admissions for people suffering from eating disorders (EDs) during the Covid-19 pandemic. An article published in the Irish Medical Journal notes that there was a 66% increase in hospital admissions for EDs in 2020 compared to 2019. Among this rise in cases are increasing numbers of men who are grappling with EDs.

One reason why eating disorders may be under-diagnosed in the male population is that the ideal masculine body image is not necessarily thin. Much of the research around eating disorders focuses on weight loss. But many men and boys with eating disorders aren’t trying to lose weight. They’re trying to gain it by “bulking up” and adding muscle mass.

Trying to live with an ED during a pandemic, when we’re confined to our homes is extremely tough. Suddenly, a fully stocked fridge, or kitchen cupboard is almost like living with a quiet but dangerous, creeping animal, ready to pounce at any second. Social media became a virtual minefield with every second Instagram story, or Facebook post artfully showing off the homely bakes of friends and family.

When my mom returned from Lidl, or Dunnes if she was feeling fancy, witnessing the bags of groceries was worrying, overwhelming, and her bringing so much food into the house felt like an attack.

These feelings towards food, and the thought my own mother was trying to offend me, paired with the knowledge that these are not healthy responses was enough to send my head into a constant vicious spin. Anorexia, and other EDs do not exist in a vacuum, for me, my restrictive eating, my mindset to food in general, and my excessive exercise not only led to an ED but also to depression that eventually infected my outlook on life by way of suicidal thoughts.

When you are in the throes of an ED like anorexia, for me and many others, it’s about control and you will do anything to keep control. Before my diagnosis I would look in the mirror – but I wouldn’t see the truth or gravity of the situation I was in.

On some level I knew this but I didn’t care, my depression had convinced me I was a burden on my family and friends. The only future I saw for myself was one filled with 5+ hours of intense exercise everyday, while restricting my food intake, a future I didn’t want to live in. However, changing this way of life, in my warped view was giving up control, and I was willing to cut my life short to maintain control.

Thus, when you consider the rise in EDs over the pandemic it tragically makes sense, we’ve all lost control of some aspect of our lives over the past year, and some of us have found that harder than others.

On the back of the fact that ED rates have skyrocketed over the pandemic, it’s concerning that all of last year’s development funding for eating disorder services was used to cover other areas of mental health provision, according to the HSE.

In a statement, a HSE spokesperson said that, “nationally planned developments for eating disorder services in 2020 had to be temporarily paused”. A HSE mental health service report from last July found that no eating disorder specialist team “was serving its full population” at the end of the year.

Jacinta Hastings, chief executive of Bodywhys, the eating disorders association of Ireland responded by saying, “we need to focus on the positive that the funding is fully available in 2021 and need to see progress during the year on this.”

Unfortunately for many people, relying on a statement like the one above is not enough. If I wasn’t privileged enough to be able to avail of help privately, and to have the backing of extremely supportive family and friends I would not have made it 2021. The availability of ED services via the HSE can be a life or death difference for many people, many people who encapsulate every age, gender, and body size in our society.

According to statements like these above, I must focus on the positives. And I do, there are positives. Awareness is growing. I just hope help comes in time for someone who desperately needs it.